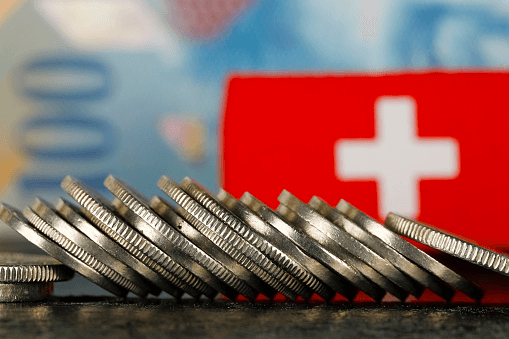 The central bank had broadly been expected to stand on a -0.75% interest rate that was the lowest in any major developed country, though some banks had suggested a quarter-point was possible.

The hike was the first increase by the SNB since September 2007 and followed Wednesday’s aggressive 75 bps rate increase from the U.S. Federal Reserve.

The currency jumped almost 1.8% against the euro to 1.0198. It was headed for the most significant daily rise since January 2015 when the SNB unhooked the franc from its euro peg, sending the currency soaring.

Against the dollar, the franc rose 1.4%.

On bond markets, yields on 10-year Swiss bonds rose 18 basis points at 1.51%, while two-year borrowing costs were more than 22 bps.

Swiss stocks plunged after the decision was announced, losing almost 3% and underperforming the pan-European STOXX index, which fell 2%.

A Swiss equity trader said franc strength added pressure on stocks in the exporter-heavy bourse, which is now close to confirming a bear market.

Switzerland and Japan had been the only two major developed world central banks yet to raise interest rates in a tightening cycle that started last year. Many central banks are raising rates in 50 bps installments.

But Swiss rate hike expectations were fanned by recent data showing inflation at a nearly 14-year high. The European Central Bank also signaled to kick off rate hikes in July.