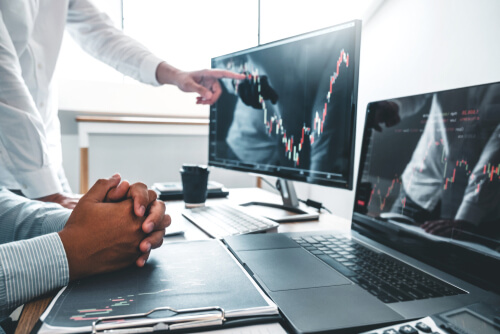 Home > Trading Education > From FAANG to MAMAA: The Basics of the Top Five Tech Stocks

From FAANG to MAMAA: The Basics of the Top Five Tech Stocks

Tech stocks have performed well over the last 20 years, but the rally has come to a halt this year. For a long time, the stocks of Meta Platforms Inc., Amazon.com Inc., Apple Inc., Netflix Inc., and Alphabet Inc. have consistently done good in the market and collectively went by the acronym “FAANG.”

However, the FAANG companies have taken a breather, and some have rebranded. Today, market players use a new acronym to refer to the biggest tech stocks: MAMAA.

The original acronym “FANG” was coined by CNBC’s Jim Cramer in 2013 when he endorsed the stocks of US technology behemoths, including Facebook Inc. (now Meta Platforms), Amazon.com, Netflix, and Alphabet’s Google LLC.

In 2017, Cramer extended the group to “FAANG” by including iPhone maker Apple Inc.

However, the team had to undergo some changes this year due to higher interest rates, market saturation, intensifying competition, and a valuation reset in tech stocks. Netflix, in particular, lost so much momentum that it was unable to keep up with its peers in terms of growth and popularity.

And in 2015, Google rebranded as Alphabet, while Facebook made the same move last year, changing its name to Meta Platforms. As a result, the “G” and “F” in FAANG had to go.

With such changes, Cramer and other market players in the tech sector needed to come up with a new acronym for the big technology stocks heading into 2023.

The market capitalization of streaming giant Netflix has dropped to $113.33 billion, although the value of software company Microsoft Corp. has increased to $1.67 trillion.

While technology is the focus of all the MAMAA companies’ businesses, not all of them are technically recognized as tech stocks. For example, Amazon’s stock falls under the consumer discretionary category, while Alphabet and Meta’s stocks are under the communications services segment.

The first four FANG stocks were internet-based, but Apple’s addition made it a broader group of tech stocks. Plus, the inclusion of Microsoft affirms the mega-cap tech focus instead of the internet focus of the original group.

Apple, Microsoft, Alphabet, and Amazon are the S&P 500’s largest firms in terms of market cap, and each stock holds a value of over $1 trillion.

Furthermore, the MAMAA stocks have a combined market capitalization of over $6.6 trillion. And with the S&P 500’s market cap standing around $30.1 trillion as of September 2022, those five stocks represent almost 22% of the index’s overall weighting.

A Fall in Big Tech Stocks

This year has been quite challenging for big tech stocks, and so far, each MAMAA stock has fallen about 13%.

The largest tech stocks by market cap had a slow start with revenue growth, and surging interest rates have weakened investors’ appetite for riskier assets.

Moreover, with interest rates constantly increasing, earnings in the overall stock market could contract, which may lead valuations to go down.

Stocks that have traded at very high valuations may need to be repriced, which is mostly what 2022 has been about. A few big tech firms are also still trying to get used to a more practical valuation that is less speculative and more realistic.

While the MAMAA stocks have taken some strong hits this year, each of their long-term outlooks remains optimistic.

All MAMAA companies, except Alphabet, have significantly beaten the S&P 500’s performance over the last decade. They were also able to outperform the more tech-focused Nasdaq index. Looking ahead, analysts continue to have a favorable view of the five stocks.

Furthermore, you, and every investor, should know that past results cannot provide you the full guarantee that the stock will succeed or perform well in the future.

The MAMAA stocks surpassed the S&P 500 during the first half of 2022, but these companies have some competitive advantages that should encourage investors to hold on to them in the long run.

Such firms can benefit from the network effect. The network effect is a phenomenon where a product or service gains more value as more people use it. Meta is one popular example that benefits from this, having seen its user base and operating profit increase simultaneously.

All the MAMAA companies have intangible assets that can help them perform better than the competition.

Meta, Amazon, and Alphabet have a significant amount of user data they can use for targeted ads, while Apple is able to produce hardware and software for its devices. With Microsoft, the chances of not finding a corporate operation that does not use the Office suite are low.

Those competitive advantages make the MAMAA stocks pretty attractive investments. Still, it would help if you looked at their individual valuation relative to their own historical value and that of their rivals before putting your money into them.

Should You Invest in Big Tech Stocks?

Big tech stocks have had a challenging 2022, although now is also your opportunity to purchase the MAMAA stocks, provided that you have saved enough and built a well-diversified portfolio.

If you’re meeting your savings goals and have sufficient cash reserves and a steady job, you’re in a good position to invest in the stocks of major tech firms.

But if you have only started your investing journey, go for total stock market index funds or S&P 500 index funds first. Betting on stocks like those of the MAMAA companies can be complicated as their shares can be expensive.

So work on growing your wealth. The more money you have, the more you can invest in individual companies.