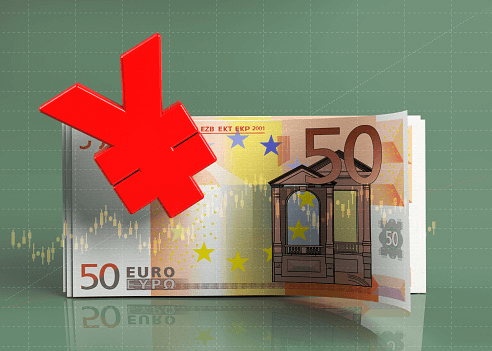 Yen Drops versus The Euro

The ECB should end its bond purchases this month; this means rate hikes can commence in the second half of 2022; therefore, leaving the Bank of Japan (BoJ) standing alone amongst its peers with its ultra-loose monetary policy.

The yen has now fallen for ten consecutive trading sessions against the euro; its longest losing streak in eight months; the currency reached a seven-year low of 143.89 per euro in European trade.

The euro gained 0.2% against a broadly stronger dollar at $1.07225, after earlier trading lower by 0.3%, as eurozone first-quarter economic growth was revised higher.

Money markets are now pricing in 75 basis points of rate increases from the ECB by September; implying traders expect a 50-basis-point hike at either the July or September meeting.

Meanwhile, the Federal Reserve should raise its interest rate by 50 basis points for a second consecutive meeting next week, in contrast to the BoJ; which has shown no signs of ending its easy policy stance.

The U.S. 10-year yield rose four basis points, consolidating around the 3.0% mark after Monday breaking back above that level.

This has helped push the dollar to a 20-year peak of 134.135 yen, with the Japanese currency losing almost 5.5% against the U.S. currency in the past eight trading sessions.

BoJ Governor Kuroda told parliament on Wednesday that yen weakening was favorable to the economy as long as moves were stable while adding that FX policy was not the authority of the BoJ.

The dollar index measures its performance against a basket of currencies, including the euro and the yen; it rose 0.1% to 102.53.

The pound fell 0.4% against the dollar to $1.2540 as political risks and fears of a slowing economy weighed on sterling.

The Aussie and kiwi were weaker, falling 0.5% and 0.6% against the dollar.

The safe-haven Swiss franc also declined, dropping to a near three-week low against the dollar of 0.9789 francs.

China’s yuan was not immune from the dollar strength, easing against it, pressured by market worries over increasingly divergent monetary policy stances between China and other major economies.